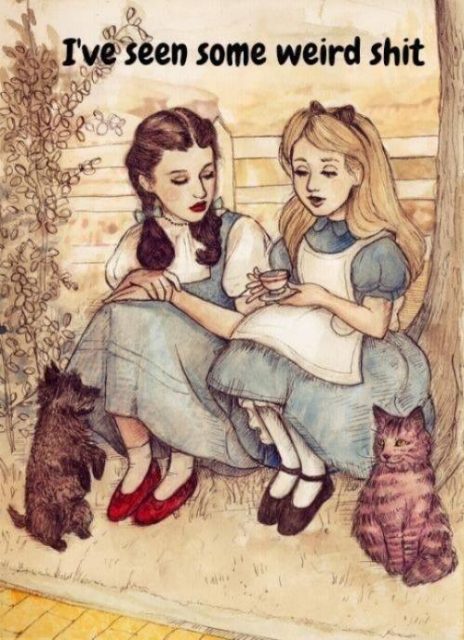 Yesterday I put out a quick 5 minute recording “Is this why we are here?”, to talk about the responsibility many of us have to be able to help people who are suddenly being woken up to the vast conspiracy that their reality is NOT what the thought it was.

Right now, it’s as if the flood gates have opened again and we are seeing another tidal wave of people who are suddenly waking up to all this insanity that is going on, who are beginning to look for answers and research for themselves, watching videos and reading articles…. and they are seriously in a state of shock, anger, grief, and fear by what they are finding. These people are confused as all hell and need YOUR help to guide them through the vast warren of rabbit holes that is now open before them.  Whether it’s the underlying story behind the current “COVID19 Pandemic lockdown”, or the sudden realization that Bill Gates is NOT the “nice nerdy philanthropist” they thought he was, or the earth shattering question of: “Where the hell are the Governments coming up with all this money suddenly?!?”, or the shocking truths behind the Hollywood veil that they’ve just learned from watching the new video “Out of the Shadows” (video below),…… The general public are suddenly being deluged with secret truths, facts and information that just a few months ago they would have categorized as “Conspiracy Theories”, and outright bullshit. And it is landing them in a very dark and confusing place.

I’m compiling here a massive amount of information, a sort of review of some of the major rabbit holes that people are about to fall down- a kind of one stop shopping spot for basic information.  Back in 2016 (when yet another huge wave of people were waking up suddenly), Lisa Harrison and I sat down and recorded the video “The Rabbit Hole Starts Here”, and I pulled together a massive amount of links and information and books for people to be able to look through, review, and research.  I’m hoping that all of you “truthers”, “Unfuckers”, “wayshowers” and “seed planters” can use this article as a reference point and a guide to help all these people begin their journey into the insanity that is our reality.

One of the major pieces that people need to comprehend about this reality, is the truth of what “Money” is, the background of the Federal Reserve, what your government IS, and who controls all things “financial” and how they use that to control the entire planet. Back in 2013 I wrote an article called “Review of the Basics: Everything You Need to Know about “money” & “governments”, and I brush that article off every few years and repost it- the last time being in 2018.  Time to pull it out again it seems, lol! Review of the Basics: Everything You Need to Know about “money” & “governments” Re-edited 2018

It’s the end of 2018 (?) and I use to always post “Reviews” of some of the basic knowledge that people should have a comprehension of. This article was originally published back in Dec 2013 on my original “Removing the Shackles” website. I brushed it off this morning when one of the UnFuckers asked a question to the group about “money” and how it all works, and I’ve cleaned up the original a bit. This is a great article to bookmark for sending to people who are just beginning their journey, or are now asking the questions about what “government” and “money” is, and it was written to be a place to start your own research journey.

Today my friends, we are doing a review of the basics of what we know about “Money” “Banking” “Currency” and “Value”.None of what I’m posting here will come as a surprise to the regular readers of RTS- this is all information that I’ve been discussing for a long time now. I am putting out this review because as Maloney in this first video states, it is KNOWLEDGE and UNDERSTANDING that is the first step to knowing and CHANGING- not just the system itself, but changing OURSELVES and WAKING UP and BEing the Change we wish to see in this world….. and beyond. It is only by kNOWing that we are able to BE who we are and DO what we are suppose to DO.

….kNOWing is the first step in recognizing our greater purpose.

Please take the time to share this information in your social circles, with friends and family and even your banker. This is the Silly Season, a time when people are caught up in the money game and commercialism of what was once a reason to get together with family and friends to share the love that we have for them. Sharing knowledge and understanding is one of the most important things we have to give: It is free and it comes from the heart with true intent of generosity.

None of these videos or documents are fully complete in their knowledge or the truth, but they give an excellent basis to understanding the basics of how this mess happened in the first place, and are great jump off points to starting a journey to discovery and digging down deeper into the rabbit hole that is all that makes up “government” and “finance”.

First up is a video by Mike Maloney- it’s actually the fourth video in a series, but it covers some of the most important angles about the Federal Reserve Bank, Banking and derivatives and the fraud perpetuated by the perceived “government” (actually a non-profit corporation), the Federal Reserve Bank, the IRS, and the Banks themselves, where currency/money comes from etc…. (ie: thin air). One of the most important points that Mike makes is at the 10:44 mark where he outright tells you that YOU are the value. That Money comes from YOU. This is a vital first step in UNDERSTANDING YOUR VALUE, and the fraud that has been perpetuated on the people of this planet for even longer than the Federal Reserve has been around. But I’ll get back to that in a moment…. The second video is a cartoon that, while it’s slightly flawed due to missing information, is a great educational tool.

First the videos and an excellent document called: Modern Money Mechanics. With these pieces of information, you will have the basic understanding of the expanse of the fraud that is perpetuated through all banking. Once you’ve watched and read these, I’ll expand on that fraud further.

The next thing you really need to understand is your “Strawman”. Basically in a nut shell, when you register a live birth of your child, the “government” (all governments, not just American and Canadian and British!) creates a fictitious entity with the name of your child, including a bond that is then traded on the stock market and earns money. Your child is then “killed off”, and the only entity left with that name is a fictitious entity that is your child’s “Strawman” – the onus is on you to prove that you are a living breathing BEing to the financial and “government” machine. The following Video and document are a great basic beginning to understand how this was done, and what they are doing with the millions, and in some cases, billions of dollars that YOUR Strawman has earned on the stock market.

This article is now reaching epic proportions so I’m just going to briefly outline a few more of the most outrageous frauds that are currently being committed on the Earth’s unsuspecting LIVING BEings- year after year, every hour of every day. 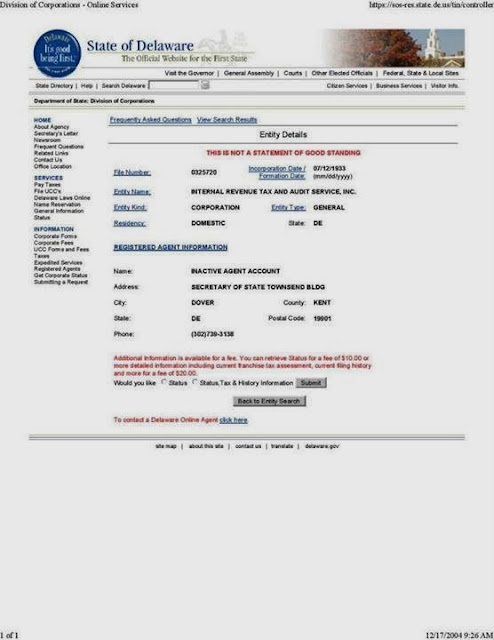 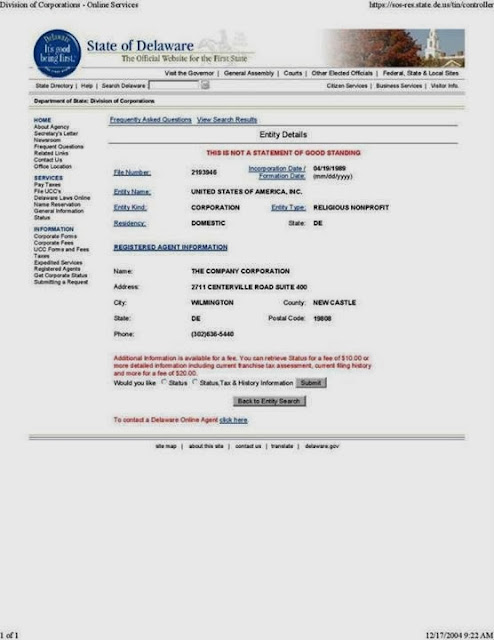 – As you learned above the Federal Reserve Bank is a privately owned and controlled corporation that answers to NO perceived “government” or governmental body.

-The IRS is a privately held corporation that is NOT part of the “government” of the United States of America. They collect taxes for the Federal Reserve and the vast majority of American taxes goes to the British Crown and the Bankers that control that country.

– Every perceived “government” in the world is a corporation, NOT a government. The USA is listed as a non-profit religious corporation to boot! Every State/Province/county is it’s own corporation. Every so called “ministry” or branch of government, ie: treasury, environment, Health and Welfare, Education, Transporation etc… are corporations. Ever wondered why when one “government agency” is running with surplus and another area of government is running in the red that they don’t just transfer money from one agency to another? Because they are different corporations!

– YOU, the living breathing Beings on this planet, are 100% of the VALUE that ALL money and currency is based on. YOU. Nothing else. YOU are the Creditor and the Banks are the Debtors. EVERY MORTGAGE AND EVERY LOAN, is ILLEGAL and Based on FRAUD.

This is the beginning of the rabbit hole. You know now that the hole is deep. You can choose to take the Blue Pill of Ignorance and walk away, or take the Red Pill of Knowledge and step off the edge to see how deep the rabbit hole is.

…I still haven’t reached the bottom, so on wards I go. For those who want to take the Red Pill, I’ll leave you with some background reading to start your journey.

Here are a few more documents from the UnFuckers Library:


…and if you don’t know who “Judge Dale” is, then I highly suggest that you read his epic series of articles entitled: The Great American Adventure

And now Links to more information:

Keep in mind that this video, Out of the Shadows” contains a very highly skewed “christian” narrative…. but the actual facts listed here all all well proven and documented.

– This scene from Captain America: the Winter Soldier, is so close to FACT, that it was shocking to watch them laying the truth so clearly… yet in a way that the general public thought it was all just cleaver “fiction” from a superhero movie.

And finally, a lovely collection of videos to continue the journey down the rabbit hole!